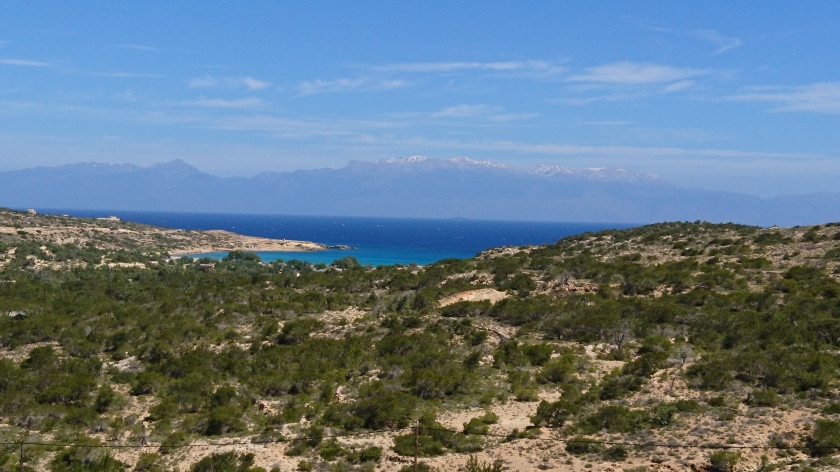 My Greek is actually coming on. Not thanks to my ‘friendship’ (long story – I should write a book.. or better, a soap opera) but the friendship (no scare quotes), hospitality and general loveliness of Greek people. I have a bagful of scribbled notes of things that people have taught me. I don’t have a teacher, I have hundreds of them. It’s as if the island itself is willing me to learn Greek. It’s actually an incredibly effective way to learn, because I attach new vocabulary to the person or situation where I heard it, which helps me to remember.

Since my MA research is about the influencing factors on English language learning, it got me wondering about whether students of English in the UK ever meet anyone who has the patience to help them in this way. I seriously doubt it. I don’t imagine many of my respondents will say ‘I studied in England and everyone I spoke to wanted to help’. Picture a grumpy pub  landlord saying ‘Yes of course I can explain the use of the present perfect. Oh and have some free food and wine too!’

I may be wrong though. Adrian Holliday would say that I’m ‘othering’ or ‘essentialising’ (1) about my own culture. That is, I’m making assumptions based on the stereotypical attributes of people from a particular country. People in the UK are: individualistic, capitalist and hence less likely to be hospitable and give time to someone without the expectation of financial gain.

Greece, however, is a different story.

There’s even a word for this phenomenon from Greek mythology: ‘filoxenia’, which can be said to be the opposite of xenophobia. Basically, (I’m ‘othering’ again) Greek people are hospitable to foreigners.

Where do these differences come from? Is it to do with the climate? In the summer in Greece everything slows down.  And what do people do? They chill out. They chat. The other day, after shamefacedly admitting to one Greek friend that I’d just walked to the beach then done nothing all afternoon, she said ‘It’s normal to do nothing when it’s hot. And it’s a 5km walk there and back- that’s not nothing!’. Thus my busy-Britishness revealed itself. (I have henceforth decided to make an effort to do absolutely nothing for at least four hours a day in attempt to liberate myself from such embarrassing capitalist tendencies. This is actually way more difficult than it sounds, hence why I’m currently lying in a hammock… writing a blog post).

Seemingly, Adrian Holliday would do away with cultural generalisations altogether. Benjamin Whorf (2), on the other hand, famously emphasised the importance of culture on language. And from my own experience, I know there is no word in Italian for ‘hangover’ and there is no word in English for the Italian ‘dislivello’ (the difference in altitude between the start and end point of a climb in the mountains) presumably because the British drink a lot, and Italy is mountainous. There seems to be a hundred different ways to say ‘no problem’ in Greek, suggesting Greeks are chilled out people. Are these otherings or facts? And I’ve heard that in Swedish there is a word for the inside of your elbow. Goodness knows what that means…

I agree with Holliday insofar as stereotypes are dangerous…But surely some differences are to be celebrated and enjoyed?

Just finished an MA programme in Applied Linguistics at Durham University, and continuing the research on language learner histories in Greece. Previously I was teaching in Italy (9 years) and the UK. I'm a Cambridge speaking and writing examiner, a conference speaker, occasional teacher of Italian, aspiring author and always working hard at cultivating my own multilingualism. I'm particularly interested in student-centred approaches to preparing students for EFL exams. Other stuff I'm into: how English is really used by 'native' speakers (check out my Twitter account @ClarkLinz), using translation and L1, the Flipped Classroom, the Lexical Approach, and the usefulness and pitfalls of self-assessment. View all posts by Lindsey Clark